Councillor Janet Carpenter is the Mayor of Okehampton for 2018/19.  Cllr Carpenter and her Mayoress, Cllr Christine Marsh, have had a busy few months supporting events both locally and in other areas of Devon.

The Mayor and Mayoress have visited other Devon towns for their special days - South Molton Olde English Fayre, Bideford Regatta, Northam Civic Service and the 50th Anniversary of Dartmoor Search and Rescue Service.

The Mayor is currently organising events to raise money for her chosen charity for the year - Cancer Research.  Cllr Carpenter is hosting Afternoon Tea on Wednesday 24th October from 2.30 to 4.30 pm in the Charter Hall and also raising funds at a Coffee Morning in the Charter Hall on Saturday 17th November from 9 am to 12 noon.

On Wednesday 24th October the Mayor, Cllr Janet Carpenter, hosted an afternoon tea in the Charter Hall, Market Street to raise funds for her chosen charity, Cancer Research UK. The afternoon was very successful with everyone enjoying a variety of scones and tea and £180 was raised. 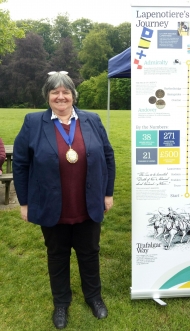 The Mayor's May News

The new Mayoral year starts at the Annual Mayor Choosing Ceremony which, this year, was held on Wednesday 15th May in the Council Chamber.  This is a formal ceremony which sees all the Councillors appointed to their relevant roles for the year.  The Mayor is supported by two volunteer Mace Bearers who have their own duties.  Once appointed, the Mayor will Chair every full council meeting and attend events to which s/he is invited.  The Mayor also attends Civic events further afield throughout Devon as the representative of Okehampton.  The Mayor can choose a Consort (who is male) or a Mayoress (who is female) to accompany them.  The Mayor doesn't get paid, but there is a sum set aside in the budget to allow the Mayor to claim back any essential costs incurred in fulfilling the responsibilities.

So, once the dust had settled, my first official event was going along to the Cancer Research (Okehampton Branch) coffee morning on Saturday 18th May.  I had lots of interesting conversations of varying subjects with many different people.  There are a dedicated team of volunteers who run the coffee mornings every week from various locations within the town and it is a good place to go and meet new people.

In the afternoon, I went along to Simmons Park to welcome the drivers and navigators who were taking part in the Grand Tour Cape to Cape Classic Car Rally as they came through Okehampton and had a quick pit stop in the Park.  Those who took part in the Rally were raising awareness and funds for Macmillan Cancer Support.  There was a tremendous atmosphere as they were on the home straight.  The cars had started out from Cape Trafalgar in the South West of Spain and headed for Cape Cornwall, following the route of the original Trafalgar Way as much as possible.
Congratulations to all those who took part for raising a phenomenal sum of £87,834 for the charity along the route.

One of the responsibilities of the Mayor is to attend various Civic events around the region.  This gives a wonderful opportunity to meet other town leaders and hear about the local issues we are facing.  It is probably not surprising that many of these are universal - traffic congestion being one of them!  I went along to the Mayor Making Ceremony at Barnstaple on Thursday 23rd May.  It was very encouraging to see that, like Okehampton, there was a very strong emphasis on recognising the work of volunteers in the community through the presentation of various awards.  I am always grateful for the time and skills that people give to make our town such a lovely place to live in.

Sunday 26th May saw the Annual Okehampton Rotary May Fair which is organised by our local Rotary Club as one of their regular fundraising efforts for the benefit of the local community.  Despite the weather being typically unpredictable, it was well attended and there was so much to see and do.  It is lovely to see our local traditions being kept alive including the children having great fun dancing around the Maypole.  How they didn't tie themselves in knots is beyond me!

On Saturday 1st June, I was privileged to be invited to the Rotary Club of Okehampton President's Dinner.  The speaker was Mr David Lemon who spoke about his adventures walking along the length of the Zambezi river travelling through Zambia, Angola and Mozambique.  He is the first person in recorded history to make that particular walk which is 2000 miles long and both the obstacles he faced in terms of his personal health and the support he received from local people along the way were truly amazing.  There was a raffle for the outgoing President's chosen charities for the year which are Children's Hospice South West and Hospiscare.

The following day I was invited to a Ten Tors post event lunch at Okehampton Battle Camp where I met representatives from all the different organisations who work so hard to make Ten Tors such a success.  2020 will be the 60th Anniversary of Ten Tors and the organisers are very keen to hear from anyone who was involved in the early days.  If this was you, then please do get in touch with them.  The email address is SWHQ-TenTors-MAILBOX@mod.uk .

On Wednesday 5th June I attended the Introduction Ceremony for the new Mayor at Northam Town Council.  This was a very interesting evening and it was good to have the opportunity to talk to others about the work we are doing in Okehampton to get the passenger rail service re-instated.

Fairplace Church put on a beautiful Flower Festival which I went along to on Saturday 15th June.  In the gallery upstairs was a gorgeous display of wedding dresses and photos from members of the congregation and downstairs were themed displays which reflected the annual cycle and rhythms of Church and Rural Life.  The quality of the arrangements and story-telling through the displays was truly incredible.

On Saturday 22nd June I was invited along to South Molton Olde English Fayre.  I have to admit that I have never been to South Molton before and it was a lovely drive through beautiful countryside in glorious sunshine.  I even took part in the Floral Dance - another first for me!

Would you know what to do if someone collapsed in front of you? - apart from call the emergency services of course.  Okehampton Public Access Defibrillators (OkePADS) is my chosen charity for my Mayoral year.  I met with two of the trustees to talk about how I could be of service to them.  They are very keen to see their free training being taken up by all members of the community.  Anyone aged 14 and over can take part.  The sessions last about two hours and include training in CPR.  What is CPR you might well ask?  It stands for "cardiopulmonary resuscitation" which is an emergency life-saving procedure that is done when someone's breathing or heartbeat has stopped.  This may happen after an electric shock. heart attack or drowning.  CPR combines rescue breathing and chest compressions.  In short, being trained in CPR and the use of defibrillators will give you the confidence to take action and give the victim the best possible chance of survival.  If you want to know more or book yourself on, then please either email them on okepads@gmail.com or check out their website: https://okepads.wixsite.com/okepads.  You can also find them on Facebook.

My next official event was in Okehampton at the Octagon Theatre on Thursday 27th June.  Community Links SW CIC put on a Music Centre Concert to showcase all that their students had learnt over the summer term.  The orchestra and choir were made up of young people of all ages and they played and sang their hearts out on a very warm summer evening.  I hope they enjoyed it as much as I did.  Congratulations to all those who worked so hard to make it such a success.

My final duty for this month was to attend the Annual Service of Commemoration and Re-dedication of St John Ambulance (Devon) in Fairplace Church on Sunday 30th June.  I expect there are quite a few people who were members of the St John Ambulance Service in their youth and learnt first aid - I know I was one of them.  The St John Ambulance Brigade was formed in 1887, however the service dates back to 11th Century Jerusalem where the first Knights of St John set up a hospital to care for sick pilgrims.  Their motto is Pro fide Pro Utilitate Hominum - For the Faith and In the Service of Humanity.

Throughout the month I attended as many coffee mornings on Saturdays that I could.  It isn't always possible to get around to every one as it can depend very much on existing commitments.  My apologies if I didn't make it to yours.  It was also lovely to have a wander around the town on Saturday 29th June which is when the Food and Drink Festival was running.  Lots of stands selling local, unique produce and plenty of visitors to the town.

‹‹ BACK TO TOWN COUNCIL